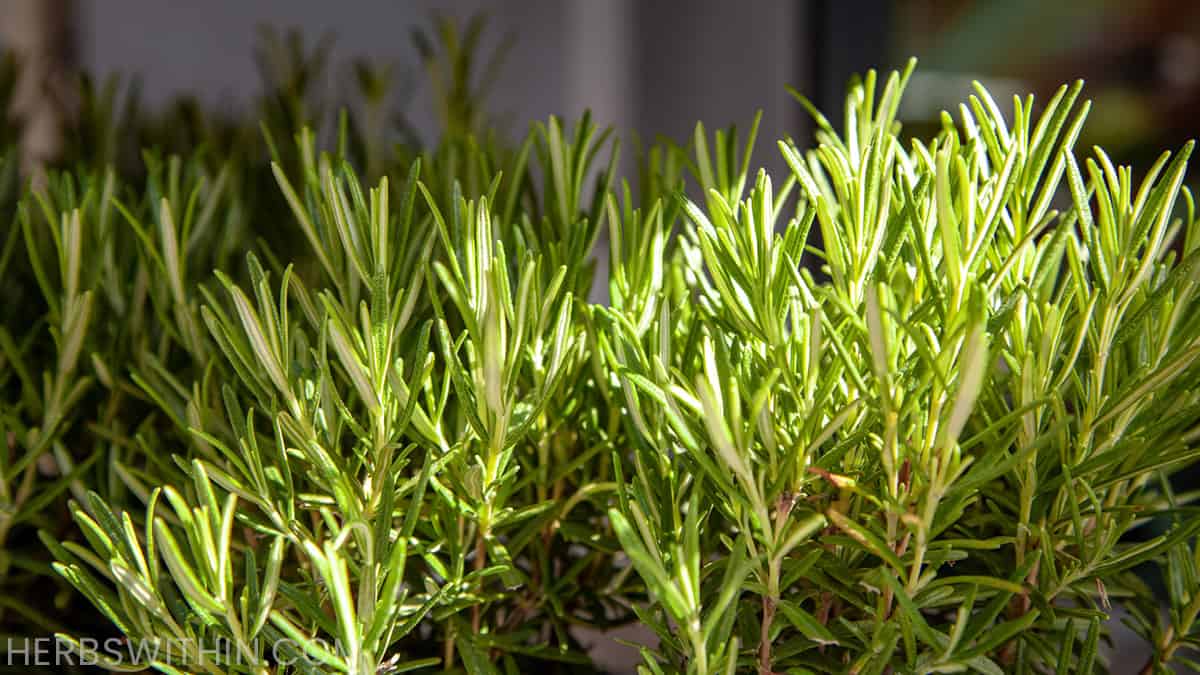 When growing herbs, gardeners consider rosemary one of the easiest plants to grow.

This herb is native to the Mediterranean region. Its origin explains why it can withstand harsh conditions, such as drought.

Like any other herb, rosemary can encounter several life-threatening issues as it grows. Be it a disease or a problem with the environment, you are there to be your rosemary’s inspector, guardian, and savior.

I think it’s important to sharpen your knife and learn all about rosemary’s problems before growing it.

In this guide, I will investigate the problems rosemary could face. That way, you’ll be ready to grow, protect, and treat your rosemary plant confidently.

Rosemary is immune to most diseases and has a low probability of getting sick. In poor conditions, rosemary is more prone to pathogens to which the plant is naturally less resistant.

Diseases that gardeners face the most with rosemary are:

Powdery mildew is one of the most well-known diseases among herb gardeners. It affects a great range of plants, including rosemary.

Luckily, there is a prevalent and obvious symptom of this disease. There will be the formation of white ash-like, powdery spots on the leaves of the infected plant.

Some species of fungi slowly invade the plant and start forming their spores on leaves. These spores can infect surrounding plants by traveling through the air.

In general, powdery mildew isn’t fatal for plants. But it will weaken your rosemary and reduce the amount of harvest.

Powdery mildew usually spreads in one of two ways.

It happens when the soil is too moist or there isn’t enough sunlight reaching your plant. Lousy air circulation/ventilation could also contribute to the appearance of powdery mildew.

To boost your rosemary’s defenses against the disease, you must ensure none of these factors are present. Keep your plant growing in the best conditions.

Don’t let the branches overcrowd. That can also cause your rosemary to contract powdery mildew.

Spacing your plants a few inches apart is vital. Spacing will help to avoid creating the perfect medium for the fungi to duplicate.

Also, regular pruning of your rosemary helps it stay immune to the disease. This will prevent the branches from overlapping.

To treat powdery mildew, mix one tbsp of baking soda and a few drops of biodegradable liquid soap with a gallon of water. Use the mix to spray the leaves weekly until the disease disappears.

Neem oil is also an effective natural fungicide that can help you eliminate powdery mildew. Use it the same way as the soda and soap mix.

The disease may persist after trying these natural methods. (That is unlikely to happen.) In that case, you can purchase some organic or synthetic fungicides.

IMPORTANT! It’s better to use neem oil only if you’re planning on consuming your rosemary.

When the plant’s leaves start to wilt, most people think there’s a problem with the leaves or the plant is thirsty. What they don’t realize is root rot can also be the reason behind this issue.

Excessive watering often causes root rot, enabling mold to spread throughout the plant’s roots. Rosemary is prone to this disease since it isn’t adapted to moist environments.

In most cases, root rot is fatal. Unfortunately, when the roots of your rosemary decay, you can’t do much to revive them.

With root rot, prevention is key. It’s essential to track the amount of water you’re providing your rosemary.

Remember, rosemary is a drought-tolerant herb. If you’re growing the herb in a container or the weather is getting hotter, you don’t need to overwater it.

Use suitable soil. You want high-quality, fast-draining soil that doesn’t trap a lot of water, allowing the roots to breathe.

Also avoid applying a lot of amendments and organic matter to the soil. Rosemary holds on to water; in most cases, rosemary needs a small amount of fertilizer to grow.

Root rot needs immediate treatment. Check the roots if your rosemary’s leaves are wilting and turning yellow for no apparent reason.

Gently remove the plant from the soil and wash the roots for a few minutes with a lot of water.

Plants with root rot will have some of their diseased roots fall off when you touch them. Such roots may look black and feel mushy.

Use scissors to cut off all the diseased roots. After, use some fungicides to spray the healthy roots. These steps should help to prevent the disease from spreading.

Bring a new container or clean the used one with a bleach solution. Fill the container with fresh, high-quality potting soil mix and repot your rosemary in it

Nip off the yellow and wilted leaves from your rosemary, and cut back the plant to stimulate new growth.

Its name, Verticillium wilt, indicates that it is a wilt disease. Fungi from the genus Verticillium can cause a fungal infection. Overall, it is not that common in rosemary.

The most common symptom of this disease is wilting of the leaves and stems.

It affects the older foliage and usually spreads from the bottom of the plant to the top. Sometimes, the fungus will affect one part of the plant; you’ll see other parts will stay healthy for a while.

This disease can easily kill rosemary seedlings, but it needs some time to take over an adult plant.

The most effective way of preventing this disease is by using disease-free soil. This can be ensured by choosing premium-quality soil.

Choosing a resistant cultivar is also another way of prevention. Making that decision can be hard to achieve, though. This is especially true when the workers at your local nursery don’t answer your needs.

Sadly, it is almost impossible to treat this disease once it infects your rosemary.

The best way to deal with Verticillium wilt is by getting rid of all the diseased plants. Start over again by using new soil, new containers, and new rosemary plants.

Gardeners know rosemary is a pest-resistant plant. Even so, some insects can still land on this herb to live and reproduce. Most of these, however, will leave rosemary alone.

Aphids are tiny and usually appear as little black or pale dots on the plant. They grow fast in quantity and might be a big problem for weakened rosemary.

The problem with aphids is they suck the food rosemary is producing for itself. They deprive the rosemary plant of energy.

The best way to deal with aphids on rosemary is to spray the plant with a strong water jet every other day. Don’t use insecticides here if you want to use rosemary in the kitchen.

Mealybugs are also small insects that suck on rosemary sap. Females are bigger and wingless, while males are smaller but have wings.

Mealybugs can be worrying and annoying, especially if you’re growing rosemary indoors.

You can prevent them by using neem oil, which is also an effective insecticide in this case.

This is a drought-tolerant Mediterranean plant. Thus, rosemary doesn’t need much water.

Gardeners often don’t pay attention to this when they water their herbs. They usually water all of their potted plants on a schedule.

Rosemary doesn’t like water as mint does, for example. So, you’ll need to consider that when you water your herbs.

Overwatered rosemary may show signs of wilting or slow-growing. Sometimes, leaves will turn yellow or black.

Wait until the soil is very dry before watering the plant. At the same time, make sure the container you’re growing rosemary in is draining water as it should.

Heavy soil, such as clay soil, is a significant problem for rosemary. Not only does this kind of soil trap a lot of water, but it prevents the roots from breathing.

Heavy soil is almost fatal for the plant, as the roots slowly die due to a lack of oxygen.

Always use premium, well-drained soil for your rosemary to avoid such a problem.

A rosemary plant getting little light and not enough warmth will show symptoms. You will notice that it grows stretched and elongated branches. It will also become weakened and more susceptible to diseases.

This problem is widespread in rosemary plants growing indoors that don’t get enough light during the day.

Rosemary grows best with at least six hours of direct sunlight daily. In case you’re growing it indoors, you need to find a sunny location for it.

If that’s impossible, you can use a full-spectrum LED light to help your rosemary get the right amount of light per day.

Rosemary plants growing in tight containers will start feeling claustrophobic at some point.

With time, your rosemary will grow more branches and foliage above the ground. As it does, it also develops more root systems below ground.

Rosemary will stop growing as it should when its roots cannot extend anymore. This will make it more weakened and fragile.

Make sure you repot your rosemary every year or so. That will guarantee the roots don’t bump against the walls of the container.

Pruning your rosemary is necessary. It will help stimulate the growth of newer and more flavorful foliage. It will also prevent it from turning woody and susceptible to disease.

Rosemary is an evergreen perennial herb. That means it can stay alive throughout the year if the climate is suitable.

One of the mistakes gardeners make is pruning rosemary right before winter begins. This action causes the plant to be too unstable and weak to survive during cold weather.

If you’re growing your rosemary under unregulated conditions, when the weather gets colder, avoid cutting it back.

Have fun growing your rosemary, and don’t forget to share all your thoughts and questions in the comments below!

How To Dry Cilantro At Home