Cilantro is a flavorful, green, leafy plant. You can use this herb as a garnish or seasoning in tasty cooking.

The cilantro plant can wither and get limp in two or three days after harvesting, losing its freshness. Drying cilantro can help you keep this herb and use it for a long time without wasting anything. Here we will tackle how to dry cilantro.

Based on the time and the tools available, there are a couple of ways of drying cilantro.

In this guide, we’ll discuss how to dry cilantro in the best way possible, including air-drying, sun-drying, in the oven, microwave, or food dehydrator. Let’s get started!

How To Dry Cilantro Via Air-Drying

Air-drying allows the leaves to desiccate gradually. It’s a more natural procedure compared to utilizing a dehydrator or a microwave.

Heat-drying plants get rid of essential oils, as well as water. It may also make the herbs lose their taste. For this reason, it’s advisable to air-dry cilantro to maintain its quality.

Here are the steps for air drying the cilantro.

How To Dry Cilantro In The Oven

The main challenge with drying cilantro in an oven is that the moisture evaporates quickly which may compromise the nutrient level and flavor of the herb.

However, if done at a low temperature you can still preserve the flavor of the cilantro.

How To Dry Cilantro In The Food Dehydrator

A dehydrator is an effective method of drying cilantro as it operates at lower temperatures than an oven. This helps to preserve flavor and nutrients.

Drying cilantro in a dehydrator is a great option, particularly if you have a lot of cilantro to dry in a short time.

How To Dry Cilantro In The Microwave

Although a quick method, you can easily burn cilantro when drying it in the microwave. Therefore, you need to keep a close eye on it while in the microwave and dry it at low heat settings.

How To Dry Cilantro In The Sun?

What Are The Benefits Of Dried Cilantro?

Like fresh cilantro, dried cilantro has numerous health benefits, including

How to Store Dried Cilantro

Now that you’ve learned how to dry cilantro, how do you store it?

Storing desiccated cilantro is easy, but most people do it incorrectly.

You can store dried cilantro for up to two years if you keep it in a sealed container in a cool and dry place. Any humidity penetrating the dried cilantro can lead to mold growth and contamination of the spice.

Is Dried Cilantro As Good As Fresh?

Although many recipes require fresh cilantro, getting it during cold weather months, such as during winter, can be challenging.

Dried cilantro leaves work well as a substitute. However, the flavor of dried cilantro is mild compared to that of fresh cilantro.

How Much Cilantro Should You Dry For Use?

It depends on how frequently you utilize cilantro in your meals. Generally, begin by drying any surplus cilantro you may have to stop it from going to waste.

Cilantro contains a strong, distinctive taste. When fresh, you can use it as a garnish, in dressing, chutney, salad, guacamole, and salsa.

On the other hand, you can use dried cilantro to prepare dishes such as stews, sauces, curries, and soups.

Always ensure that the cilantro is completely dry before packing it for storage. Mold can develop in storage if humidity is still present. Keep it in a cool, dry place away from direct sunlight; it will be good for up to two years. 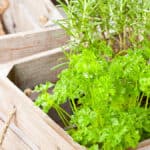